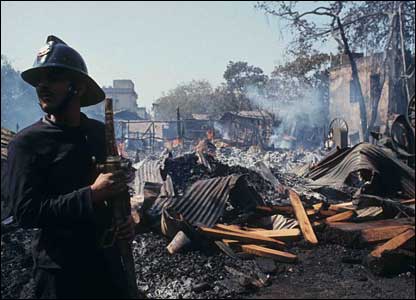 It’s surprising to even think about I am just one of the 1.2 billion called Indian citizens how much is the worth of a life? Many have lost their lives and many more injured it has not happened for the first time! But it better be the last. I am talking about the manmade disasters; irrespective of the reasons the event has occurred and set many more than we can count in a state of fear and losses irrevocable. Who is to be blamed? Hahahaha blame game is the old recipe in the years over which our so called custodians of government have really learnt how to make a delicious dish; which sounds delicious; made to be imagined as delicious; made to believe the aroma is delicious nay to say it only exists but not in reality.
Welcome to India from a commoners view of life. There is this saying I am recalling again and again ‘United we stand; divided we fall’ how true it is. Think about it last time we acted divided we lost the country, which took generations to recover, last time we lost our respect by acting divided, but this time we are losing our lives. Reasons for Bombay (Yes I am calling it Bombay cause you know what for ages it has been Bombay; dividing people on the name of cast, religion is not interesting anymore) to be attacked is; as many of us who have actually lived in Bombay would know, that yes it is the financial hub of the country also; it is one city where the people are not divided; they act one; they behave one; even though nobody has time for nobody but in crisis everybody has acted a family; remember the floods; people did open those stores which provided basic necessities and you know what the owners rationed the products; it was not about money it was about acting responsibly; nobody had to tell them what has to be done; it was people who helped people; officials, agencies, forces they did turn up but big names, short of sight. This is the true spirit of Bombay; this is the spirit of Bombay; that makes it Bombay.
How much is the worth of a life is the question? I am not interested in what government has done; I am not interested of what government would do? I am not interested how many commissions are go na step up to give false claims that it shall not happen again? I am interested in leading where such avoidable disasters do not become the part of my everyday life! What can you do about it? Don’t make money as the barriers for the incompetence on performance cause you know what still India has the largest amounts of black money in foreign banks. It is your abyss crave of money that has lead India to become a play ground for antagonism testing’s.
No matter what you say now; who you blame now the damage is done; it cannot be forgotten and shall not be forgotten. There is this saying that we know ‘that Indians would join hands and bow and tolerate’ you know what let me complete it for you’ who only have known the first part of saying the whole thing is ‘Indians would not only join hands and bow but will also know when to open the hands and slap right on the face’. Stop hogging on the money, stop this bloody corruption, stop this mal practices, stop making laws for the heck of making them cause at the end of the day no matter how much money you have hogged upon; there is not even 1p that you will be able to take along.
Live life not just to be lived but life that has been made worth living.
Posted by Aniket Jha at 1:05 PM No comments: